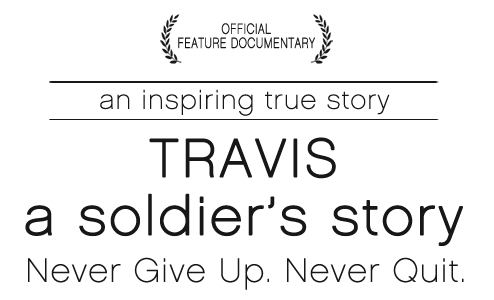 Travis: A Soldier’s Story is a challenging documentary featuring the inspiring true story of United States Army Staff Sergeant Travis Mills of the 82nd Airborne. Travis lost portions of both arms and legs as the result of an IED (improvised explosive device) on April 10, 2012 while on patrol during his third tour of duty in Afghanistan. Travis is one of just five quadruple-amputees from the wars in Iraq and Afghanistan to survive their injuries. Featuring powerful interviews and emotional reenactments from Travis and Kelsey Mills, and fellow soldiers who witnessed the events of April 10th, Travis: A Soldiers Story is an intimate look into the life of a wounded solider as he faces the unimaginable physical and emotional challenges of this life-altering injury. Travis’s story sheds light on the daily inward and outward struggles of our wounded veterans and the difficult rehabilitation processes they face; and Travis’s openness and incredible perseverance will challenge us to look at the way we deal with our own personal trials in life.

Travis: A Soldier’s Story is produced by non-profit Fotolanthropy, a movement of photographers and cinematographers committed to sharing the inspiring true stories of individuals and families facing difficult life circumstances.  The crew behind this film is a special collective of creative artists who volunteered to donate their time to this project – including pre-production planning, production and filming, editing and scoring. All funds raised toward the film were used exclusively for production equipment and travel expenses.

Retired United States Army Staff Sergeant Travis Mills of the 82nd Airborne is a wounded warrior, motivational speaker, actor, and an advocate for veterans and amputees. Despite losing portions of both arms and legs from an IED while on active duty in Afghanistan, Travis continues to overcome life’s challenges, breaking physical barriers and defying odds. Travis lives by his motto:

“Never give up. Never quit.”

Travis’s story has been featured on numerous local and national news outlets: Press

On April 10, 2012, United States Army Staff Sergeant Travis Mills of the 82nd Airborne was critically injured on his third tour of duty in Afghanistan by an IED (improvised explosive device) while on patrol, losing portions of both legs and both arms. He is one of only five quadruple amputees from the wars in Iraq and Afghanistan to survive his injuries.

Thanks to his amazing strength, courage, an incredible will to live, the heroic actions of the men in his unit, the prayers of thousands, and all the healthcare providers at the Walter Reed Army Medical Center, near Washington D.C., Travis remains on the road to recovery. Every day is a battle, but Travis continues to astound friends and family alike with his progress and with his amazing spirit. SSG Travis Mills is a genuine American hero, and for his incredible sacrifice, we are forever in his debt.

In September 2013, Travis founded the Travis Mills Foundation, a nonprofit organization, formed to benefit and assist wounded and injured veterans. Travis and the foundation are actively involved with several veterans’ organizations including, National Veterans Family Center in Maine.

Travis also founded the Travis Mills Group, LLC where he consults with and speaks to companies and organizations nationwide inspiring all to overcome life’s challenges and adversity.

Travis: A Soldier’s Story is told exclusively through interviews and reenactments from Travis Mills, his wife Kelsey and fellow soldiers. Josh Buck (who is also Kelsey’s brother), combat medics SGT Daniel Bateson and SGT Alexander Voyce, and Ryan Theriot and Brandon Fessey (who were also injured in the explosion) all give gripping interviews, as well as brave appearances as themselves in dramatic recreations of the events of April 10th. This film gives audience members the unique, intimate opportunity to not only hear the stories of those who were actually there, but also experience the events with those same individuals.

This film would not be possible without our incredible supporters, sponsors and volunteer crew. Travis’s story was initially intended to be a typical Fotolanthropy short-film. But soon after interviewing Travis and Kelsey Mills at Fort Bragg, the Fotolanthropy team felt Travis’s personality and his story were meant for so much more.

Not only did we want to expand our film with Travis, we wanted to exhaust all options at our disposal to do so with cinematic excellence. In December we took to the crowd-funding site Kickstarter in hopes of raising funds for further production, and in just three weeks we successfully raised $16,700. Check out the Kickstarter video here. Funds were used to access the RED Epic M and cinema-grade lenses, as well as studio space and lighting, props and wardrobe, and travel. Additional funds were also raised through the sale of Fotostrap: The Camera Strap That Gives Back- a fashionable line of high-end camera straps whose sales help raise funds for Fotolanthropy. Fotostrap created an exclusive camo strap called ‘The Travis’ and all proceeds from the sale of this camera strap go directly towards Travis: A Soldier’s Story.

Just weeks out from filming, Veterans Airlift Command generously offered to fly in several soldiers who were with Travis on April 10th – Josh Buck (Travis’s good friend and Kelsey’s brother), combat medics SGT Daniel Bateson and SGT Alexander Voyce, and fellow soldiers Ryan Theriot and Brandon Fessey. This gracious donation allowed us to expand the scope of Travis: A Soldier’s Story even further by not only allowing us to film reenactments of critical story elements, but also interview these soldiers about their experiences.

Because of Travis’s rehabilitation and work schedule, as well as work schedules of the other soldiers, all filming had to be completed in an extremely short time-frame – just 3-and-a-half days. With just a little over two weeks to secure equipment, shoot locations, props and wardrobe, and plan out our film schedule, we quickly assembled an amazing group of fellow creative artists who donated their time to help make this opportunity possible.

Travis: A Soldier’s Story is an incredible combination of a national community of support, servant-hearted artists and a soldier’s willingness to share his story. We are so grateful to Travis’s incredible support community who embraced our idea; to the creative artists who volunteered countless hours of time to this project; to Josh, Daniel, Alex, Ryan and Brandon for their willingness and grace in sharing their stories and recreating these events; and the Mills and their extended families for sharing with us, assisting us and trusting us with their story.