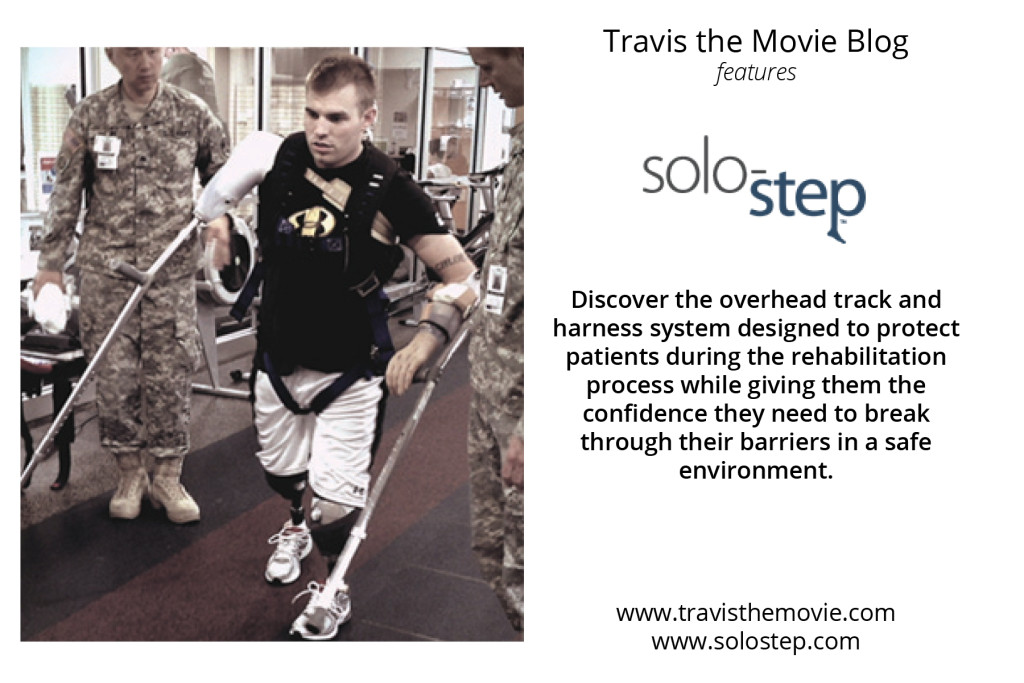 Travis’s recovery was aided by the many doctors and nurses at Walter Reed Army Hospital, his own sheer determination, support from Kelsey, Chloe and family, and also made possible because of Solo-Step, a track and harness system that gives patients confidence when learning to walk again after injuries.  Today we are honored to feature Solo-Step through an interview with Vice President Brock Hutchinson.

How did Solo-Step get started?

Solo-Step, Inc. started back in 2006 when they acquired the patent from a father and son who first invented what we know today as the Solo-Step Track System. The son had lost his leg in a boating accident and was having a difficult time adjusting to his new prosthetic.

His father recognized the need for some sort of device to hang from the ceiling to provide fall protection for his son. After trying a few different set ups, they settled on a track and harness system, and it worked perfectly.

This powerful message resonated with myself and two of my business partners. We decided to acquire the company to spread awareness for people struggling to regain balance, strength, and independence.

We started off by introducing the concept to VA Hospitals around the United States to help wounded veterans learn to walk again. Soldiers began rehabilitating with a new-found confidence that allowed them to progress much faster than usual.

Here is a video of quadruple amputee, SSG Travis Mills using the Solo-Step at the Walter Reed Army Medical Center.

What happened after success in VA Hospitals?

Seeing this inspired us to expand our reach into private practice physical therapy clinics, skilled nursing facilities, rehabilitation hospitals, wellness centers, and even homes across nine different countries and almost all 50 states.

Tell us about the benefits of Solo-Step.

Some of the most powerful benefits the Solo-Step Track System can provide are a safe environment for both patients and therapists to participate in rehabilitation activities, the elimination of the fear of falling, and an increase in confidence that allows patients to improve functional outcomes.

What I love most about Solo-Step is hearing all of the stories of how our device has impacted people and their lives in a positive way.

I’m reminded of a gentleman, Peter, in his 90s who was having a very hard time walking. By the third week using the Solo-Step Track System Peter was moving better, and by the fourth week he could walk backwards and had so much speed and strength in his gait he was practically jogging.

Here is a video of Peter when he first started his treatment program.

After one month of therapy using the Solo-Step Track System, Peter was able get rid of his walker and continue living his life to the fullest!

The confidence that the Solo-Step Track System instills in patients and therapists is paramount to the success of therapy.

Thank you so much for sharing the heart and mission behind Solo-Step, Brock!

The Travis the Movie team is especially grateful to Solo Step for the work they are doing to help veterans like Travis exceed expectations when it comes to physical limitations.  Solo Step has been a big supporter of Travis: A Soldier’s Story, and they even purchased 100 DVDs to send out to their customers!  (If you haven’t had the chance to purchase the film on DVD or Blu-Ray, follow this link here.)

« Support the Miles for Mills 5K in Augusta, Maine on Memorial Day!
Travis’s Book “Tough As They Come” is now Available for Pre-order! »